North-western Ontario – 1970’s. The volunteer fire department got the call in the evening about 9 pm and attend the house fire with their water tanker and other equipment.  On arrival they found the living room of the house on fire. They quickly unloaded their equipment  and went into the front room which contained a large fireplace and started to knock down the fire and tried to contain it.

The owner of the house was standing outside in somewhat of a daze and seemed to be staggering about. Eventually he went to a fireman and reported that his five year old daughter was inside the house. Immediately he was questioned and the fire chief learned that the girls room was on the right end of the house.

The firefighters instantly switched their attack to the part of the house that contained the child’s room. Part of the crew soaked down the burning section of the house while the rest of the crew kept the fire from spreading from the living room, which was now fully engulfed with fire. 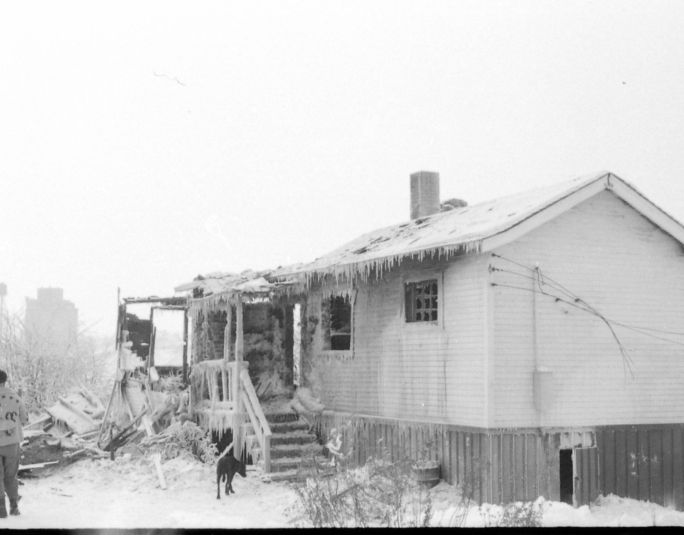 One fireman with a mask and oxygen entered the girls room by breaking in a back window. Once inside he crawled around the room on the floor and searched for the child.  She was not in her bed. Smoke filled the room and the visibility was zero.

At one point he thought he found a body but when it was brought outside it was found to be a large stuffed doll. The father was questioned further and it was discovered that he was inebriated and was of no help. A second fireman replaced the first and frantically searched the child’s room again but failed to find her.

The entire crew went back to extinguishing the the rest of the fire until it was out. The standing portion of the house was badly damaged by smoke but the fire was contained before it fully caught fire.

Early the next more the firemen returned to the site and started to carefully search for the child’s body in the still standing section of the house with no success. The search then continue in the badly damaged portion. When the search was almost completed they found a body on the floor of the closet in the living room near the front of the house.

The autopsy results later determined the child died of smoke inhalation and not from the burns later subjected to the body. On the night of the fire a couple of the fireman had to be forcibly kept away from the drunken father who had failed to tell them the child was inside the house. The mother of the child was at the local laundromat and came home to find the house destroyed and her only child dead.

As the back of the house shows the firemen made a gallant attempt to save the child in the bedroom, only to find she was in the living room at the time of the fire. During the rest of the investigation it was determined the father had been drinking and fell asleep in the living room with the fireplace going.

It was presumed a spark from the fireplace set the floor on fire.  The child panniced and ran and hid in the entrance closet.  The father eventually woke in the burning living room and phoned the fire department.  In his drunken and confused state he had no idea where the child was and failed to inform the firemen as soon as they arrived.

The photo of the back of the house shows the broken window where the fireman entered the child’s room. Had they know where the child was hiding they could have easily rescued her.  Instead their attention was directed to the other end of the house and they let the living room burn while trying to find her. The entire volunteer fire department was badly demoralized by their failure to rescue the child.