The first week in May I happened to look out my kitchen window and saw a small bear cub in my yard. Because of its size I immediately started looking for the mother but she was no where in sight. 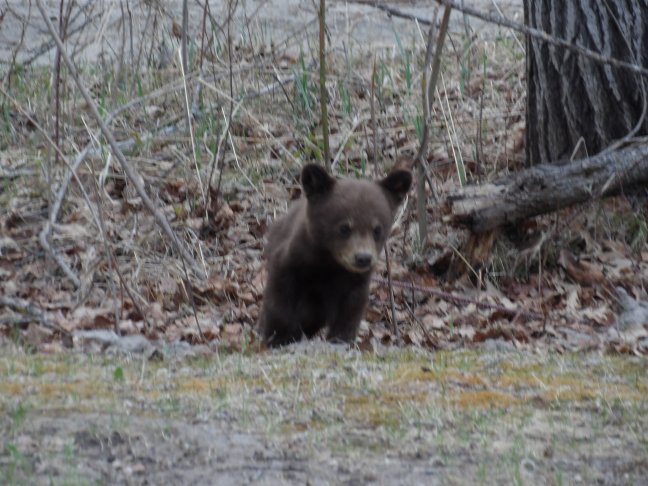 Not wishing to meet the mother, I stayed inside and the bear cub wandered off into my woods.  A couple of days later the same scene played out but this time I had two small bear cubs.  When I say small I mean they were far to small to be out and about without their mother.

The third time this guy showed up I felt safe in venturing out into the yard and obtained the above photo.  He was obviously alone, looked thin, hungry, and looking for help.

This photo of the pathetic little orphan makes it obvious it needs help.  I went to the house for a hamburger bun and rolled a piece across the lawn to him. He immediately picked it up and started munching on a corner.

Because of his condition he was not too afraid of me and I could get within a dozen feet before he would turn and move away.

I was hoping a bit of food would help him survive until he found his mother. From the difficulty he was having it was obvious he was thirsty so I set out a dish of milk.

Alternating between the bun and the milk he slowly did better then wandered off into the woods.  I left the milk and in the morning it was all gone. The cub never returned and even though I later searched our woods I was unable to find any of the cubs or their mother, dead or alive.

The experts tell you not to feed a bear cub regular milk as they cannot digest it and it makes them sick.  Goats milk is recommended.  Since I did not have goats milk and the cub was in serious condition I did my best.  Had I gone for goats milk the cub would have been gone before I got back.

As the days past following the bear cub visit we kept our eyes open in the hopes of seeing the mother and her cubs.  I also contacted a few people but no one else saw the cubs again and no one ever saw a mother bear with cubs.

I did what little I could, all the time making sure I did not get between a mother bear and her cub.  Mother nature can be cruel and I doubt of this little guy survived. All we can do is appreciate his photos and hope he made it.

One thought on “Baby Bears”