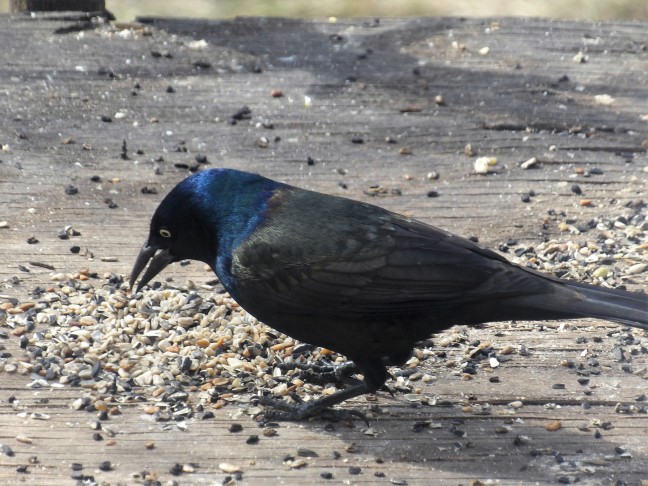 I have maintained a bird feeder at my home in the woods for almost forty years. The bird seed and suet has been there all year round, and especially in the winter when it is badly needed.

A number of years ago I noticed a couple of Common Grackles were starting to feed at the suet cake. It was in the early summer and the birds were not eating the suet but filling their bill with as much as they could carry. It seemed reasonable to assume that they had a nest nearby and were feeding the young.

Since I had never seen a Grackle nest I was interested it learning more. The birds would load up and then fly over our house and head south east.  By they time I could get around the house and into the back yard the birds would be gone. In time I learned to wait in the back yard for the birds to fly over the house and then watched them leave our woods and fly over an open field and into the creek woods. After that I lost them and failed to find the nest.

A week or so later I was on the other side of the creek woods walking the dogs across the field.  Suddenly a Grackle flew out of the woods with a mouth full of my suet, and continued its flight across the fields to the south east. I was carrying my binoculars so I was in the right place to watch the bird head across the road and then continue on its journey straight as a arrow. It seemed obvious it was making a bee line for the neighbors woods more than a half mile away.

I eventually  followed the flights and confirmed the Grackles were feeding young in a nest more than a half mile away from the suet. The tempo of the flights picked up as the young birds grew larger and eventually a cake of suet would not last more than two days. This excellent food source and the quantity that was available each trip, made the long journey worth while.

Grackle parents are very dedicated to looking after their young and early in the fall they start to gather in large flocks, earlier than most other birds. They are very territorial and are quick to drive other birds away from their food sources.

Each spring one or two pairs of Common Grackles start the whole process again.  They work hard and steady and I am happy to share my suet. I am thinking of claiming them as dependents and adding them to my income tax expenses..